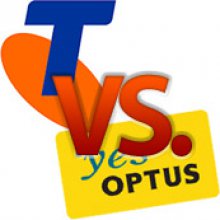 Each of Australia's major Telco's have their strengths and weaknesses, perceived or otherwise.

Nowhere are these attributes more starkly revealed than when dealing with customer support, particularly via social media channels.

When Telstra recently announced their competitive cap plans, I decided it was time to take advantage of the top mobile network in the country. Although the quality of their phone network had worsened, Optus had been good to us, a stark contrast to our previous dealings with Vodafone.

One particular area that Optus excells at is customer support via social media channels and I have personally been the beneficiary of excellent treatment by the Optus team.

I'm now one month into our new contract with Telstra. How do they stack up?

The support offered by @Optus is first class. If there was a problem, I would simply tweet @Optus, recieving a reply within minutes, followed up by a phone call shortly thereafter.

I never had to wait on hold, go through a complex call-direction system or deal with overseas support staff.

Someone in my time zone would call, any issues would usually be resolved almost immediately.

Even leaving Optus was made easy by the social media team, who engendered a great deal of goodwill with me during the process, ensuring that I'll return the moment the network meets my needs (I now do a great deal of rural travelling).

Telstra, on the other hand, have already proven less than stellar.

Our first bill arrived yesterday and I wasn't entirely surprised to see that there were major problems. We were being charged for twice as many accounts and phones as we'd ordered and the pricing wasn't consistent between them. The 'signing bonus' we'd been promised also hadn't been applied. The difference was several hundred dollars.

Unfortunately, the response from @Telstra wasn't exactly representative of the incredible support I recieved with Optus:

Not exactly what I'd hoped for.

The Optus social media team are actively involved in helping people solve problems with their accounts.

Telstra are simply an online version of an automated dialing system. They're just telling you which number to call.

Put simply, Optus have built a great deal of trust with myself and many other customers who've had the same incredible support.

Telstra have managed to get me offside within weeks of joining their network.

For many corporations, social media is a cynical PR move, designed to be seen to be listening. Others have embraced the trend and are actually listening.

Which do you want from your corporate social media support?